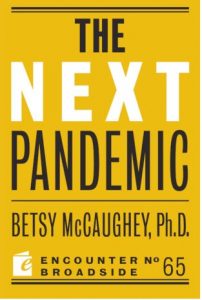 America is suffering from two public health crises. One is caused by a virus. The other, a brutal economic shutdown, is something we have brought on ourselves. Both the virus and the shutdown are deadly. But many more Americans will likely die from getting laid off than from the virus.

The shutdown wasn’t caused by the virus. It was a frantic response to America’s unpreparedness. For more than two decades, a dozen official reports sounded the alarm. The career pols and federal bureaucrats did nothing. Message to Washington DC: No more commissions and televised hearings. It’s time to act.

Step One: Prepare our hospitals and nursing homes with effective infection control equipment and training.

Step Two: Target the vulnerable, namely the elderly, while allowing the economy to function. Nationwide, over half of all deaths occurred among nursing home residents. In some states, the figure is as high as 85 percent.

In this incendiary Encounter Broadside, Betsy McCaughey shows how to battle the next pandemic without an economic shutdown, including technologies to make workplaces healthier, protections for hospital workers, and severing dependence on China for medical supplies.

Despite the suffering, there’s reason for optimism. America will be ready for the next pandemic.