The Economic Argument for Infection Prevention

Many hospital administrators worry that they can’t afford to implement these precautions. The truth is, they can’t afford not to. Infections erode hospital profits, because rarely are hospitals paid fully for the added weeks or months of care when a patient gets an infection.

For example, Allegheny GeneralHospital in Pittsburgh would have made a profit treating a 37-year-old video programmer and father of four who was admitted with acute pancreatitis, but the economics changed when the patient developed an MRSA bloodstream infection. He had to stay in the hospital 86 days, and the hospital lost $41,813, according to research by Richard Shannon, former chairman of the Department of Medicine at Allegheny.

Similarly, a woman came into the hospital for stomach-reduction surgery, a procedure that should have produced a $5,900 gross profit for the hospital. But when she developed a central line-associated bloodstream infection and had to spend 47 days in the hospital, that profit turned into a $16,000 loss. 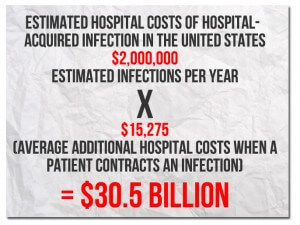 At Allegheny General Hospital, the average payment for a patient who developed a central line-associated bloodstream infection (CLAB) was $68,894, but the actual average cost of treating the patient was $91,733, leading to a gross loss of $26,839 per case. The hospital had 54 such cases in the medical intensive care unit and coronary care unit between July 2002 and June 2005. The infections resulted in a total economic loss to the hospital of $1,449,306. Hospital infections add more than $30 billion annually to the nation’s health tab in hospital costs alone.38 The tab will increase rapidly, as more infections become drug-resistant. A new study based on all the hospital infections reported in Pennsylvania in 2005 dramatizes this enormous economic burden. The average charge for patients who developed an infection ($173,206) was nearly four times as high as for patients admitted with the same diagnosis and severity of illness who did not contract an infection ($44,367). The 11,688 infections reported added over two billion dollars in hospital charges that year. That’s in one state alone! Other studies on the cost of infections found that: Post surgical wound infections more than double a patient’s hospital costs. When a patient develops an infection after surgery, the cost of care increases 119 percent, on average, at a teaching hospital, and 101 percent at a community hospital. Urinary tract infections increase a patient’s hospital costs by 47 percent at a teaching hospital and 35 percent at a community hospital. The average ventilator-associated pneumonia infection (a type of infection contracted when a patient is on a respirator) adds $40,000 to a patient’s hospital costs. Staphylococcus aureus infections are especially costly. According to a recent nationwide study, patients with Staph infections incur hospital costs that amount to more than triple the average hospital costs of other patients. Not worried because your hospital’s infecton rate is well below the national average? Even hospitals with a below-average infection rate lose money on infections. A recent survey of 55 hospitals, where the infection rate averaged only 4.09% —well below the national average —showed that treating these infections wiped out inpatient operating profits. The fact that hospitals lose money on infections doesn’t necessarily prove that spending more on prevention will increase profits. Fortunately, there is compelling evidence that testing patients for drug-resistant bacteria and treating those who test positive with contact precautions yields a high return immediately and requires no capital outlays. For example, Dr. Carlene Muto at the University of Pittsburgh-Presbyterian, where MRSA infections were slashed 90% in a pilot program, found that implementing these precautions in one medical intensive care unit cost $35,000 in additional labor and materials, but prevented infections that would have cost over $801,000 to treat. That’s a 20 to 1 financial return the first year, not to mention lives saved. Two community hospitals in Charleston, South Carolina, demonstrated that targeted surveillance—testing only patients deemed at high risk, such as patients recently hospitalized, living in a nursing home, or with kidney problems—produces more modest reductions in infection and lower financial returns. This is not surprising, because a significant number of patients carrying MRSA go undetected. The costs of targeted surveillance, including laboratory tests and supplies such as gowns and gloves, cost $113,955 and yielded just over a 10 to 1 return, saving the hospitals $1,548,740 in avoided treatment costs. A recent review in Lancet concludes: “Virtually all published analyses that have compared the costs of screening of patients on admission and using contact precautions with colonised patients with the cost savings made by preventing health-care associated MRSA infections have concluded that the combination of surveillance cultures and barrier precautions results in cost savings for hospitals.”

“The costs of caring for patients who become infected with MRSA are much greater than the costs of screen programmes.”